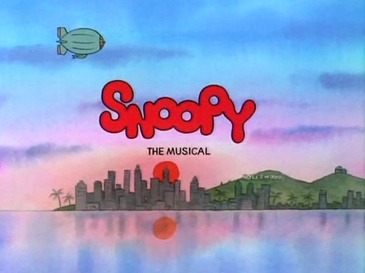 Snoopy: The Musical is the 31st prime-time animated TV specials, based on characters from the Charles M. Schulz comic strip Peanuts. It is an animated adaptation of the musical of the same name, and originally aired on the CBS network on January 29, 1988.

This is one of the two musicals in the Peanuts franchise where Snoopy has a speaking voice which only viewers can hear.

A series of vignettes are strung together regarding the Peanuts gang. Each vignette has a song that involves various members of the gang:

“Don’t Be Anything Less Than Everything You Can Be” – Charlie Brown, Peppermint Patty, Sally and Linus sing about being the best that you can be, as Snoopy observes.
“Snoopy’s Song” – Snoopy decides to obey his owner more after Lucy almost convinces Charlie to trade him in for a cat.
“Woodstock’s Theme” – short musical interlude plays as Woodstock wakes up and flies, with Snoopy commenting on his technique.
“Edgar Allan Poe” – Peppermint Patty, Lucy, Sally, Linus, Charlie Brown agonize over the teacher calling on them, figuring that no matter what, the teacher will ask them something having to do with Edgar Allan Poe.
“I Know Now” – Sally, Peppermint Patty and Lucy sing about what they have learned as they have grown up.
“The Vigil” – Linus once again holds vigil in the pumpkin patch on Halloween night, in hopes that the Great Pumpkin will appear. Snoopy accompanies him, but wears dark glasses so as to prevent anyone from recognizing him.
“Clouds” – The Peanuts gang lay about in a grassy meadow, talking about what they see in the clouds.
“The Great Writer” – Snoopy attempts to compose his written masterpiece: “It Was a Dark and Stormy Night”.
“Poor Sweet Baby” – Peppermint Patty and Charlie Brown discuss understanding what love is.
“The Big Bow-Wow” – Snoopy is selected as Head Beagle, and celebrates by going out on the town, and performing at a stage show.
“Just One Person” – The Peanuts gang sing an ensemble piece about believing in yourself

And yes, that is Cam Clarke as Snoopy, which really adds another great layer to this special.

Watching this recently was my first time ever seeing this special and I didn’t think it would amount to too much as it doesn’t have quite the lasting impact that the last Charlie Brown musical special, You’re A Good Man, Charlie Brown, had but…much to my surprise, I actually did find myself really enjoying it more than I would’ve thought.

The animation is overall very good even though there are definitely times where they recycle animation from previous specials although it’s not much of a big deal. And the voice work once again is great and even more so, the addition of Cam Clarke just adds another layer to the special that makes it stand out because he’s a really good Snoopy, much better than Robert Towers was in You’re A Good Man, Charlie Brown, he just fits in the role so well and heck, anytime he’s singing, it’s always a delight to listen to.

Yeah, much to my surprise, Snoopy: The Musical reaches that same enjoyment factor that I got from You’re A Good Man, Charlie Brown, a great overall soundtrack, nice animation, fantastic voice work, it’s another great 80s Peanuts special that I feel like doesn’t get much attention but it’s definitely worth seeking out and watching.

Follow The Reviewing Network at our Facebook page at Facebook.com/TheReviewingNetwork for continuing updates and debuts for new blog posts and also follow my Twitter feed so you can see new postings right as they are posted.

This site uses Akismet to reduce spam. Learn how your comment data is processed.